For this first installment in the brand-new LGBThursdays, I’m going to write about coming out as LGBTQA* in college/university. It’s a very individual experience that people have different outcomes with, but I’d like to talk about potential ways to come out, how to deal with negative reactions and all the other nuances of coming out in a new place.

LGBThursdays are going to feature topics that are of interest to LGBTQA* people, such as coming out, dealing with negative reactions, relationships, discrimination, and advice. Want to submit a question or topic for advice? Go to the “contact” page here.

Coming out in college is hard. Maybe not as hard as coming out in high school, because college is supposed to be a more open-minded place – after all, you gotta pay to be here, right? That doesn’t mean people should underestimate how scary and hard it can be to come out in generally, never mind while you’re also juggling classes, extracurriculars and making new friends.

When I first arrived at my university, I had no idea how to come out or when to. I was in a unique situation, because my girlfriend and I chose to live together. We were both terrified of making friends, but equally terrified that we’d scare off new friends for any number of reasons–being in a same-sex relationship, or the fact that we lived together.

College, in my case, was that awkward time when I was already out to everyone except the new people. My friends back home knew. My childhood friends knew. My entire family knew. The only people who didn’t know were the new people I was meeting at my university–friends, peers, professors. I didn’t know how cool it was to slip “my girlfriend” or “I’m bisexual” into my essays or conversations. So at first, I simply didn’t. 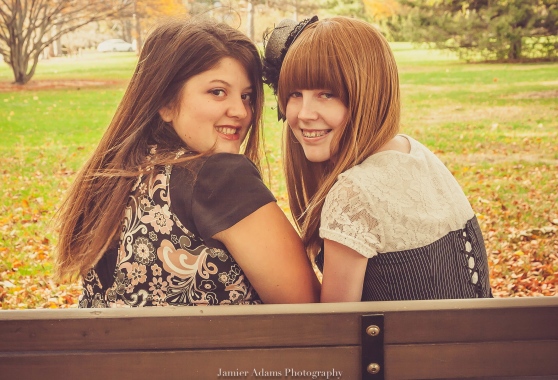 (A photo of my girlfriend and I at Stanley Park. Copyright Jamier Adams Photography.)

My girlfriend and I went on as if we were friends, without explicitly ever telling anyone whether we were dating. In high school, she and I began as friends, and then started dating. Our coming out happened as our dating began–more and more people who hadn’t already guessed realized that we were both bisexual. In college, we didn’t have this luxury, because we didn’t have a solid group of friends yet.

We had our relationship status showing on Facebook, but it didn’t prove to anyone that we were dating. Some people assumed, others guessed but weren’t sure, and some probably didn’t even notice it. This taught me a lot about the ambiguity of social media. Finally, people got up the courage to ask us straight out if we were dating. “We’ve seen pictures of you cuddling and kissing, and you’re dating on Facebook. Is this real?” they asked. I started laughing – I laugh maniacally when I’m nervous. My girlfriend took the floor and admitted we were dating. Don’t worry – we were well-received by all our close friends.

You can take my route, and just try to be as fabulously gay as possible in hopes people will notice. You can do this if you’re single, too, by having things like an LGBTQA* pride bracelet, pride pin or pride flag somewhere in your room, on your purse or backpack, or on your person. Sometimes people will just get the hint when they first meet you but not feel comfortable asking until they know you better, but these subtle signs can help them to realize.

Similarly, slipping LGBTQA* topics into a conversation can be one tactic to figure out how cool your friends or professors will be about it. You may be thinking, “Why would my professors even need to know?” They don’t, you’re right. I attend a small liberal arts school. All of the professors I’ve engaged with, for the most part, know me on a first-name basis. They recognize me. Many of them know I’m LGBTQA* because of my social activism for the community, or because it’s in my writing in some way. This is one way I get friends, peers and professors to know I’m LGBTQA*–by just throwing it out there casually, without making a big to-do. If people are surprised for a moment, they often get over it and feel more comfortable asking me questions.

If you can’t say it, write it. My close gay friend used this tactic to come out to his roommate freshman year: he wrote an essay about coming out as gay in high school and asked his roommate to proofread it. After his roommate read it, he was very accepting. This saved my friend from the awkwardness of finding a way to tell him, and he felt much more comfortable being around him after he was honest. Some people choose not to tell their roommates, especially if they are afraid of negative reactions and homophobia, and that is completely valid. If you do feel unsafe in your room, you might want to consider speaking with your Residence Director, Resident Assistant or another authority on campus. They can help you transfer to a room where you’d feel more comfortable, and many campuses have LGBTQA* living communities.

Join an LGBTQA* group on campus. You can probably find a group like a Gay-Straight Alliance or a Queer-Straight Alliance on campus. There’s no requirement to say your sexual orientation and gender identity at these clubs, but they may serve as opportunities to meet other LGBTQA* people and get comfortable coming out to others. You can also slip it into a conversation with friends who don’t know – i.e. “Hey, I’m going to a GSA meeting later, but I’ll be back at 9 if you want to watch a movie.” You could even invite straight friends to a meeting or an event; it’s called Gay Straight Alliance for a reason! Two of my closest straight female friends attended the Pride Parade near our school with us, and I think it helped to make us closer and let them see how beautiful it is when the community gets together in support. 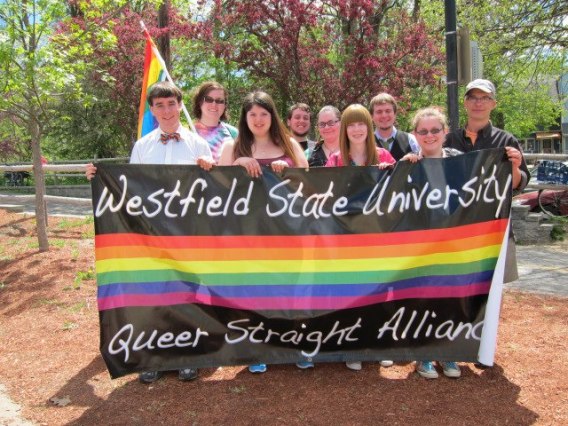 (A photo of my university’s Queer Straight Alliance at the Northampton Pride Parade.)

Whatever tactics you use to come out in college, just remember: keep yourself safe, and take your time. If you’re not sure how someone will receive you, you don’t have to tell them now or ever. Do what makes you feel most comfortable. If you’re really close with someone and want to come out to them, you can take the leap of faith that they’ll love and accept you.