For an early birthday gift, I got what every girl wants: a Pusheen plush! Yes, my girlfriend surprised me with this little cutie when we started spring break, about a week and a half before my birthday happens. And what a great surprise he was. I’ve been aware of the new Pusheen plushes by GUND, but I love her even more than the pictures could have prepared me for.

Although this was a gift, I’ve decided to review it because it will be a pleasant review, and therefore is not likely to make the gift-giver angry. 😀 *insert adorable Pusheen smiling*

If you haven’t heard of Pusheen yet, you’re honestly missing out. Pusheen is an Internet meme that is, frankly, 1000% more adorable than the other memes like #TheDress and Surprised Patrick Star. I’ve been a fan of Pusheen since the first list of “6 Reasons You Should Consider Being a Cat” circled around the Internet circa 2010. According to KnowYourMeme.com (hey – that’s a reliable source when it comes to memes! Don’t give me the side eye, academia!), Pusheen originated in 2010 on Tumblr, via the comic “Everyday Cute” by artists Clare Belton and Andrew Duff. The artists say that Pusheen is based on Clare’s childhood cat, who was named puisin (the Irish word for kitten) after being adopted from a shelter. This origin story has everything I like: animal adoption, cats, web comics and artists.

By August 2013, Pusheen had a Facebook page with over 1 million likes. In June 2012, Clare Belton announced she was working on a Pusheen book, which just confirms what I’ve learned about the Internet in the past 5 years or so: if you gain enough fans for something, you can bring it out into the ‘real world,’ beyond online. (Just look at Justin Bieber, although that’s one example I wish had never happened.) 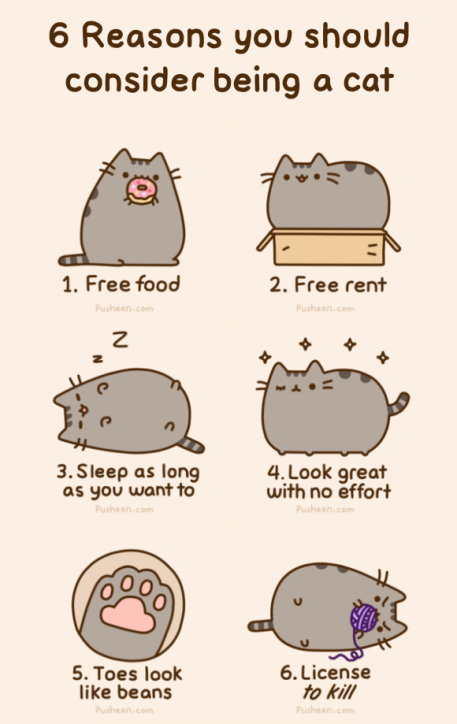 That was the first Pusheen comic I ever saw. I fell in love. I mean, come on. She’s fat, she’s cuddly, and she’s absolutely right – why wouldn’t you wanna be a cat? I never looked back from the adoration after that day.

So when my girlfriend surprised me with a plush Pusheen, my first thought was, “Cuddle buddy!”

She bought me the Pusheen medium plush, which is 12″ in length and 7″ tall. You can purchase it on Hey Chickadee, but you can also buy it on Amazon.

Honestly, I’m a huge fan of this Pusheen plush. Others who received the product were worried this plush might be too small, but I think the medium is a perfect size for a nighttime cuddle buddy. If I wanted a little cutie to put on my desk, the smaller 6″ Pusheen would be ideal. (And let’s be real here, this Pusheen won’t be my last, but rather the start of a collection!)

This plush is really soft, and great for cuddling with. It’s adorable, in a way that’s universal enough that my dad – who doesn’t know what a meme or Pusheen even is – thought it was great. The plush resembles the Pusheen from the comics so well that you’d know upon first sight that it was the very same fat tabby cat. And the plush comes with a holographic tag that shows Pusheen wagging her tail at you, which gives you that ‘real life’ .gif feeling. (But doesn’t stop you from arguing with friends about how to pronounce “gif.”)

I’m not sure which website my girlfriend ordered from, what price she paid or how fast her shipping was, but I do know that she gave it to me before my birthday, so the shipping couldn’t have been that slow. Overall, for the normal price range of the plush, I think it’s a great product to own for any Pusheen-lover. I would rate it a 10/10, and encourage GUND to come out with an even bigger sized plush for the Pusheen-fiends who want something more like a body pillow sized cuddle friend.

Now for the cute story of receiving Pusheen: My girlfriend helped me move my things into my house after spring break. Before dropping her off, I asked her to close my eyes while I retrieved a surprise for her – it was a Pusheen plush holding an ice cream cone. I handed her it and she opened her eyes and gave me a huge hug. Then I went and dropped her off at her house. Afterward, when I came home, I went into my room and found my very own Pusheen, left with a note from her, letting me know he was an early gift. We literally both surprised each other with Pusheens on the same day. If that’s not a reason to instantly love her, I’m not sure what is!

2 thoughts on “Review: Pusheen Plush by Hey Chickadee (and learn a bit of Pusheen’s history!)”